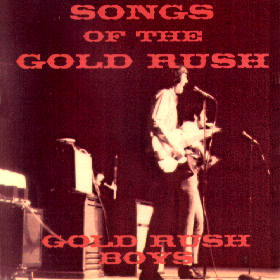 Songs of the Gold Rush

These are the songs of the Gold Rush. Well, not exactly!

These are the lyrics of the Gold Rush. The music was written by Jimmi Accardi and performed by the Gold Rush Boys.

The band was about to record both lyrics and music when drummer Dick Hart asked, "What if they had electric guitars and rock & roll musicians in 1849? What kind of songs would they have written? Sure, the words would be the same but what would the music have sounded like? What if we could go back in time with the technology of today and re-write the songs?"

With this idea in mind, the Gold Rush Boys went into the recording studio and produced what you now hold in your hands the authentic Gold Rush lyrics of 1849 set to rock & roll rhythms and melodies of 1991 performed by the Gold Rush Boys.

This album is packed with great performances and songwriting styles reminiscent of The Band, Neil Young, Buddy Holly and the Beatles. A gold record if I ever heard one!