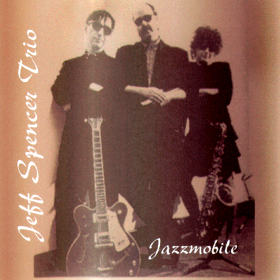 Hotwired and already in motion, the Jazzmobile will be over to pick you up just as soon as you alert it by powering up this fabulous CD! It works like this...you put on the music and the music travels into you, and the sounds combined with your brain waves are beamed over to the Jazzmobile, which does a lot of traveling in nearby dimensions. After picking up your signal and determining your location, it then comes through to this dimension and beams you aboard from here, or wherever you happen to be...Life aboard the Jazzmobile flows and rumbles along, and takes you to some rather strange, haunting and lyrical places that only look familiar. Actually, the floor rises and falls along ley lines exclusively mapped out by The Jeff Spencer Trio. You'll marvel at how your whole room is moving along while you kick back and hold on...Although known to be played for many countless hours at a time by jazz travelers, if you do happen to stop the CD somewhere along the way -- no problem -- the Jazzmobile will simply pause and drop you and your universe off...somewhere. Then it will be gone 'til next time, traveling as it does in slow tubular-shaped perpetual motion just outside this space and time, due to the traffic congestion and parking problems in many local and nearby dimensions. Try it, you'll like it -- Worth the ride!