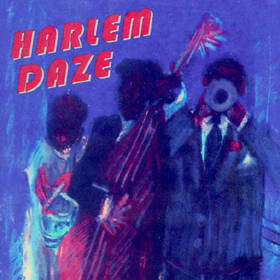 First time I ever saw the Golden Apple on Broadway between 108th and 109th was in fall of 1958, when Mark still ran it as a coffee house. Shep Sherbell brought me in there one day just to get out of the oppressive late August heat.

Only a few weeks later, Mark sold out and we ended up with the storefront and its few dismal chairs and tables. We kept the beautiful antique copper-and-brass 8-cup Italian espresso machine --part of the bargain -- but added a stage, losing two tables -- no big deal for us, since we were going broke rather rapidly in any case.

Mark got out of the whole thing, but his other shop, Serendipity, is still alive and well today as Serendipity III, although with new owners...and Shep Sherbell, who'd kept his day job as a Life photographer, went on to become the cover photographer for Mandrill and other great groups.

Fool that I was, I stayed with the club until it went entirely down the drain in December, 1960.

Right up until that time, it was filled with people from opening time at 4 PM to closing time, which was usually shortly before or just after dawn.

Then we went out in search of clubs that were still open after we were closed. There were many after-hours places in those days, barely tolerated by upstairs neighbors, and kept from closure by payoffs to cops and firemen and whomever else wandered in looking for graft. We paid protection from three different sources, but that's the way it was, and it was part of the downside of being in that business.

I also kept my day job, working first at Oppenheim-Collins as assistant personnel director, then at Hammacher-Schlemmer's first as sales-clerk, then assistant buyer, and finally as store trouble-shooter to avoid paying me enormous amounts in sales commissions, after I sold the Cherrywood-lined bomb shelter and the private Long Island bowling alleys.

Yes, that's right...two of them. I also designed a rather fun home security system for Dr. & Mrs. Lars Schmidt who were, along with Pat Buttram, Eva Gabor, and the incredible Victor Borge, some of my customers.

Meanwhile, I had been living with my girlfriend Renee (pronounced, for some strange reason, Ree-Knee) Rosenberg. Renee had four roommates; Sammi Claire (Helayne Pacincus of Paramus, New Jersey, as I recall); Judy, one of the first Bunny-Mothers at the Playboy Club; Rita, an up-and-coming operatic soprano, and Gabrielle (Gaby) Martin, whose current boyfriend was a new horn player freshly arrived after the closure of the Byrd House, Donald Byrd.

Renee and her roommates, and therefore mine also, moved from the east 80's down to the Chelsea Apartments over on 26th Street, which was about the time Renee was working at BBD&O.

It was Renee who had brought me to the Cedar Bar to meet artists Franz Kline, Jackson (Jack the Dripper) Pollack, Bill deKooning (am still in touch with family after all these years) and many others of the New York School, with which I am, incorrectly, associated. I am a deeply committed figurative artist with associations more along the lines of the Ashcan School, if anything.

It was also Renee who brought me, kicking and screaming, to all those art films at tiny strange midtown theatres (if it was spelled "theatre", you knew the tickets were at least double) and it was her interest in jazz that sparked mine.

We began hanging out at all the New York hangouts, starting with the Blue Note and ending with the Living Room, where Nancy Wilson had what was, I believe, her debut.

Donald Byrd was a frequent visitor to the Chelsea Apartments and as a result, so were other musicians, most of whom are now legendary, and about half of whom were -- honest -- named Johnson. Related? No. I asked, of course.

It was during those years that I became friends with Philly Joe Jones and through Donald and Gaby, met Herbie Hancock, whom I first encountered at an apartment-painting party in the East 20s, as I recall. All I remember is being handed a reefer, looking up at them tall ceilings, listening to Byrd on the horn two rooms down the hall, and the next thing I knew, it was 1962.

When I heard they were going to call my number, I ran downtown and enlisted in the Army Security Agency (there were no ASA in Viet Nam, I was assured and reassured) and after that I moved out to L.A. to try my luck at the TV, recording and film industries, in which I worked until 1974.

Meanwhile, Jimmi was living in Brooklyn, a place to which no self-respecting Manhattanite would go, so we saw little of each other except when we jammed did a gig together, which was seldom.

Jimmi was busy backing up B.B. King and many other R&B greats, formed a rock band called the Laughing Dogs which rode the charts for three years, and ended his last tour doing a gig with the Monkees!

Meanwhile, Bob Canatsey, our sax player, was working out with Stan Kenton and other great Windy City bands! We were amazed at his playing on this session and even more amazed when we found out that two weeks after this "Harlem Daze" session, he had a triple-bypass (he's okay now, thanks).

The music isn't really our own; it's a blend of jazz and blues, maybe fusion is the right word; something that just grew out of the wild genetic sporting that took place in the 1950's and early 1960's.

One of the earliest musical influences on me, besides sitting right next to Herbie Hancock, unarguably the most brilliant keyboard artist in his field, and seeing Miles Davis' face, was the rock-solid bass work of the great, Milt Hinton.

It was in hopes of following in his footsteps that I embarked on the bass, and it was he as role model whom I held steadfastly before me while trying to get a Checker Cab (the only one in which my huge double bass would fit) in the rain, heading crosstown fifteen minutes before a gig. If not for him, I wouldn'ta known.

They called me "Chalky" and laughed when I plucked bravely away at my clunky old German bass, and tolerated me when I sat in...those few times I felt sufficiently daring to risk those looks that newbie white musicians get when they hesitantly try to get in the elusive jazz/blues groove, not realizing that it never comes easy, a fact which the old-timers keep smilingly to themselves. It's ors to discover.

Hell, Herbie dreamt of composing classical pieces; he helped me overcome my shyness and feelings of being out-of-place, reminding me that there were plenty of times he felt very definitely out of place. If he could transcend the limits imposed on him, why couldn't I? Sure, I'd get some stares, some unpleasant, even racist, comments. So why not a New York Jew jazz bassist?

I still didn't consider art as a dependable source of income, and so continued in the music field for almost twenty years.

In Hollywood, I met the legendary Ray Brown at, of all things, my buddy Harry Nilsson's first RCA session, along with a few other guys who proved longtime friends -- Mac Rebennack, Bob Segarini, Van Dyke Parks, my bestest buddy Bill Graham, Jr. and, a few sessions later, the great Jim Keltner.

Through all of the later years of rock and roll with Jimmi and Bob and our drummer Bob Bachtold about whom you notice I have said almost nothing (he is a man of mystery, with strange connections, possibly a MIB in hiding) and Oz (The Great) Fritz, Bill Lazwell's fabulous engineer, the fifth in our RatPack, I have never forgotten those nights in Harlem, and neither have the other guys in the band.

It was hot, muggy -- air-conditioning was something you only got in major theaters -- and the sidewalk was swarming with people out for a late-night summer stroll from the Apollo all the way down to 86th Street. I know, because I walked it, many times, with singer Annette Washington and her roommate Shirley, a model for Jet and Ebony magazines.

I loved it; Jimmi loved it; Bob Canatsey loved it, and even our younger members of the band are fascinated by the memory, fabricated in them through song and story, film and book, newscast and fable.

Thanks to all those who enriched our lives with the tales of theirs. It was Donald Byrd who explained to me how to get the most out of my instrument -- "Your ax is your voice, it's how you sing."

I'd like to close with a quote from my dearest pal, Norma Dolores Egstrom:

"I would pay to play this role!"