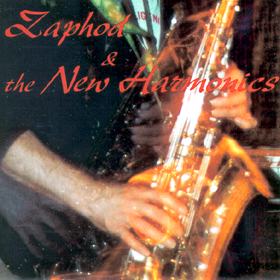 Everybody in the galaxy listens to Zaphod & the New Harmonics. From the Central Core to the furthest reaches of Sector RMB81, their space soul, rock & roll sound is heard all over Sub- and Macro-space and those who can't make it to their live gigs listen to their recordings on microchip.

The CD you hold in your hands contains a special kind of music - fine art, as opposed to commercial. While it is played and danced to all over the Galaxy, the only place it isn't played is n planet Earth, and that's understandable because humans of this planet like their music straight and very serious. They don't want to laugh at music and this music is funny!

Zaphod & the New Harmonics have just completed a truly awesome tour! They've played all the major planets and intergalactic crew ships and were the opening act for Hot Black Desiato at the Restaurant at the End of the Universe. Although Hot Black's band is known as the hottest band to ever crash into the sun, notable pop reviewer Clive Heat-Lightening, writing in Bauxite Trapezoid, was recently quoted as saying, " the fact that Zaphod & the New Harmonics opened for Hot Black Desiato clearly proves that their music can be survived..."

With 574 platinum chips out to date (they record on chips Out There, not cassettes or CDs), Zaphod & the New Harmonics is a group you're bound to come across sooner or later. If you're one of those rare beings with a sense of humor and don't mind having your familiar chromatics messed with, you'll just love 'em.