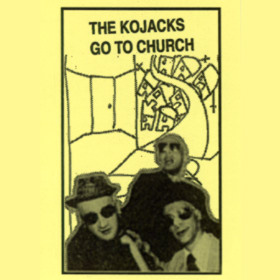 The Kojacks Go To Church

The Kojaks took the stage, charmed the audience and, all the while, tossed out lollipops to the punks up front. Well, now they're back! That's right and they're goin' to Church!

Back in the late 1970s, the Kojaks made a gigantic splash in the underground music scene. They showed up at CBGB one night, played an incredible set of music and word quickly spread. Nobody was really sure who they were or where they came from.

The next time they played at this famous club, the place was packed. Everybody who was anybody on the music scene had heard about them and wanted to check it out for themselves. And there was also just a little dash of disbelief about the whole affair. I mean, really now, here were a bunch of fantastic musicians, all dressed in identical bald wigs, sporting the jaunty hats, sunglasses and leisure suits of the television detective, belting out tunes a la Telly with just a touch of Frank thrown in for good measure.

This absolutely hysterical parody was performed with excellent musicianship, flair and humor. The Kojaks took the stage, charmed the audience and, all the while, tossed out lollipops to the punks up front.

I was lucky enough to see the Kojaks live about a half dozen times and still grin fondly at the memory.

Well, now they're back! That's right and they're goin' to Church! You know, I just realized I am doubly blessed. Not only did I have a chance to see the Kojaks live, I was also brought up Catholic! This is a rich combination. And to take it one step further, not only have I seen the Kojaks live and experienced a Catholic upbringing, I was also lucky enough to have experienced the Church during the era of high masses, heavy-duty frankincense and grade school nuns who wore yards and yards of black cotton, sensible shoes and large rosaries. I mean, I was there. And now, the Kojaks bring you your very favorite Catholic church hymns in that incredible Kojak style! Yes, Jack, you know what I'm talkin' about.

You will laugh until your eyelashes hurt and your toes curl. This is a great musical gift for someone you love, so get two!