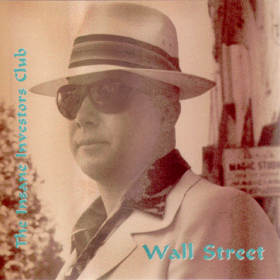 What do you get when you place instruments in the hands of a group of wacky artists, writers, and musicians who have a passion for the stock market? You get the Insane Investors Club. Known for their whimsical practical jokes, artistry and fine sense of humor, this band has produced a powerful CD entitled "Wall Street" that highlights their musicianship and songwriting talents. The songs range in style from rock to blues to country to some very fine R&B doo wop, reminiscent of the Platters.

The Insane Investors Club band members include world-renowned songwriter / artist E.J. Gold, Jimmi Accardi, who played with The Monkees and B.B. King, and other members of Columbia's "Laughing Dogs". Their common interest in the stock market sparked a creative frenzy resulting in a collection of songs relating to the good times and bad times of the stock market. One outcome was the production of a CD sent to the Squawk Box crew at CNBC as a gesture of thanks for all the fantastic market tips they've broadcast to investors worldwide at the dawn of every stock market day. The band continues having fun making music and laughing at themselves and all those crazy enough to "play" in the market.

These songs are part of the album entitled Wall Street written entirely by the Insane Investors Club's prolific songwriting team Jimmi Accardi andE.J. Gold. In addition to being "the number one song on the Squawk Box Hit Parade," the Insane Investors Club's "Kahuna & the Brain" was also the top listing in the "Hot New MP3's" of the Featured Music and Artists category on the MP3 website, which boasts over 100,000 song listings. This song and others from the group's album Wall Street can be downloaded for free from MP3. Squawk Box's Fran Zarnitzky invited the band to play live by satellite for their 4th Anniversary Celebration. Said Accardi, "Of course we said yes ... what an opportunity! Besides, it's a terrific show and we wanted to support them." The band assembled at 2 a.m. at Gold's Penn Valley studio, joining the Pacific Satellite Uplink Crew to beam a mini-concert over to the East Coast early morning stockmarket show. The 4:00 a.m. PST broadcast opened with clips from the music video "Wall Street" which features the stock market hits as well as the band's a capella renditions of Happy Birthday. Songwriters Jimmi Accardi and E.J. Gold enjoy the show. Gold says, "It's a kick. The on-air crew, Mark Haines, David Faber, Joe Kernen, Kathleen Hays, and Maria Bartiromo are highly informative, and professional. Even more importantly _ the group has a sense of humor." Host Mark Haines interviewed Gold, the "Insane Investor" himself about the band and the club's investing strategies. Gold spoke about the benefits of charitable donations of stock rather than cash and credited Mark and the Squawk Box crew for popularizing this idea. Haines said that the Club's work is outstanding in this area. For more on Insane Investor's insane investment strategies, go to insaneinvestorsclub.com. Squawk Box is aired by cable and satellite simultaneously to the United States, Great Britain, the Middle East and South Africa. According to its website, CNBC serves 150 million households in 70 countries worldwide. In case you missed it, here's your chance to relive Squawk Box's 4th Anniversary.