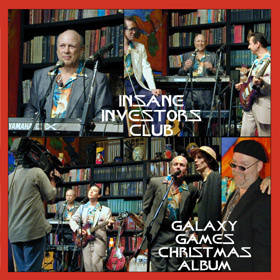 When the Insane Investors Club were not playing Christmas songs, they rocked the 4th anniversary celebration on a live global network T.V. broadcast to over 150,000,000. CNBC's satellite uplink truck arrived at 2 a.m. Friday, Aug. 6th for coverage of the Insane Investors Club's tribute to CNBC's early morning stockmarket program Squawk Box, in honor of its Fourth Anniversary Celebration.

In addition to being "number one song on the Squawk Box Hit Parade," the Insane Investors Club's "Kahuna & the Brain" was also the top listing in the "Hot New MP3's" on the home page of MP3, which boasts over 100,000 song listings. This song and others from the group's album Wall Street can be downloaded for free from MP3.

Songwriters Jimmi Accardi and E.J. Gold enjoy the show. Gold says, "It's a kick. The on-air crew, Mark Haines, David Faber, Joe Kernen, Kathleen Hays, and Maria Bartiromo are highly informative, and professional. Even more importantly _ the group has a sense of humor."

Host Mark Haines interviewed Gold, the "Insane Investor" himself about the band and the club's investing strategies. Gold spoke about the benefits of charitable donations of stock rather than cash and credited Mark and the Squawk Box crew for popularizing this idea. Haines said that the Club's work is outstanding in this area.