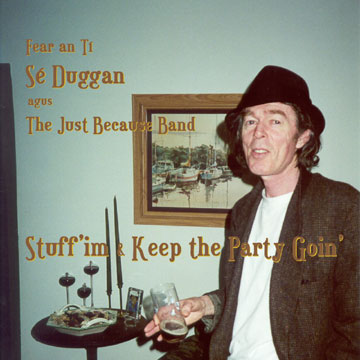 Se Duggan & The Just Because Band

* Cart FAQ *
It all started when I went up to Oliver to see Alice and Bill, just back off a trip to Reno.They'd given the Greyhound driver some Hal Roach tapes to put on over the intercom and everyone had gone into convulsions, rockin' an' rollin' in the aisles, crackin' up and creatin' an awful rí, rá, agus, rooli-booli.

Conjurin' the scene, I had to borrow the tapes.

Back in Vancouver, I managed a small music studio up over Broadway, near Main, with rooms that looked out to Tom Lavin's Blue Wave Studios, across the alley.

So I got to work; listening to "His Master's Voice". Hour after hour I listened; and hour after hour I told 'em - to me, meself and the walls, crackin' up at every session, bar none.

I couldn't remember when I'd had so much fun, alone!

After a couple of months of this indulgence I'd the urge to share this new found wealth with friends and neighbors alike; for the life of me though, I couldn't figure out how they'd all seem to thin out, rapid like, soon as they'd see me comin'. T'wasn't long after 'till I was back to bare walls, bare bulb, and ....talkin' to meself - arís.

Some of the students were gettin' antsey and wanted to put on Céilís. So, pointing them in the direction of the Anza Club, off they took and booked us in for a whole winter season!

I'd no recourse. I repaired to Blue Wave.

Well, as luck would have it, Ken, our sound man through all of this carry on, set up Studio B - for one last thrust - into the void. Put your listenin' shoes on and don't say I didn't warn you.

Regina, Winter of The Year of the Snake.