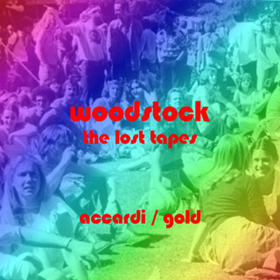 Woodstock -- the lost tapes is a tribute to an era embodied in the artistic lives of those who have over the many decades resided in the artist's community of Woodstock, N.Y.

E.J. Gold a resident in the 50's of the Zena Mill, member of the Woodstock Junior Art League, and painter of The Woodstock Series was, even as a child, aware of the magnetism of this locale for avant-garde artists, musicians, and theater people who not only created but also dynamically lived out their artistic expression, exploration of consciousness and an awareness of harmony with nature.

As a hub of artistic activity influenced by these principles, Woodstock naturally attracted in 1969 the swarms of music lovers who came to surrender to the mood the music conjured during the Woodstock Festival. And the spirit of the music will live on...