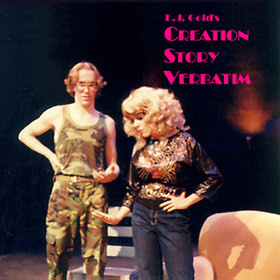 As performed live at the historic Nevada City Theater in 1984 to a standing room only audience that hung on every word.

This is a raw "Fourth Way" comedy featuring the brilliant comedic talents of New York stage actress Grace Kelly Rivera as the Lord God, and the wild comedy of Robbert Campbell Trice as the dumb but loyal Archangel Gabriel.

This performance is considered one of the best of over 1200 given by a variety of casts over a period of more than 30 years since it's L.A. debut in 1967. Creation Story Verbatim has also enjoyed a 2 month run at the Gruber Theater on Broadway in New York and an 8 month run at the Ohio Theater Space in New York's SoHo district.

The double cd recording of this performance was done with a stereo pair of PZM microphones that were postioned Downstage Left and Downstage Right. The listener is given a strong 3D sense of the actor's dynamics and positioning as they moved about the stage.

The dialogue was captured with crystalline clarity along with the ambience of the audience and the acoustics of the space. You'll feel as if you're right there with them.

This play is a thought provoking, "divine" comedy that benefits from epeated listenings in order to mine the gold nuggets of Work data it contains. And it keeps getting funnier every single time!